Having a child is one of the most special moments of our lives, but finding the perfect name can sometimes feel overwhelming. Many of us find inspiration from baby books, family names, celebrities and even our favourite songs. 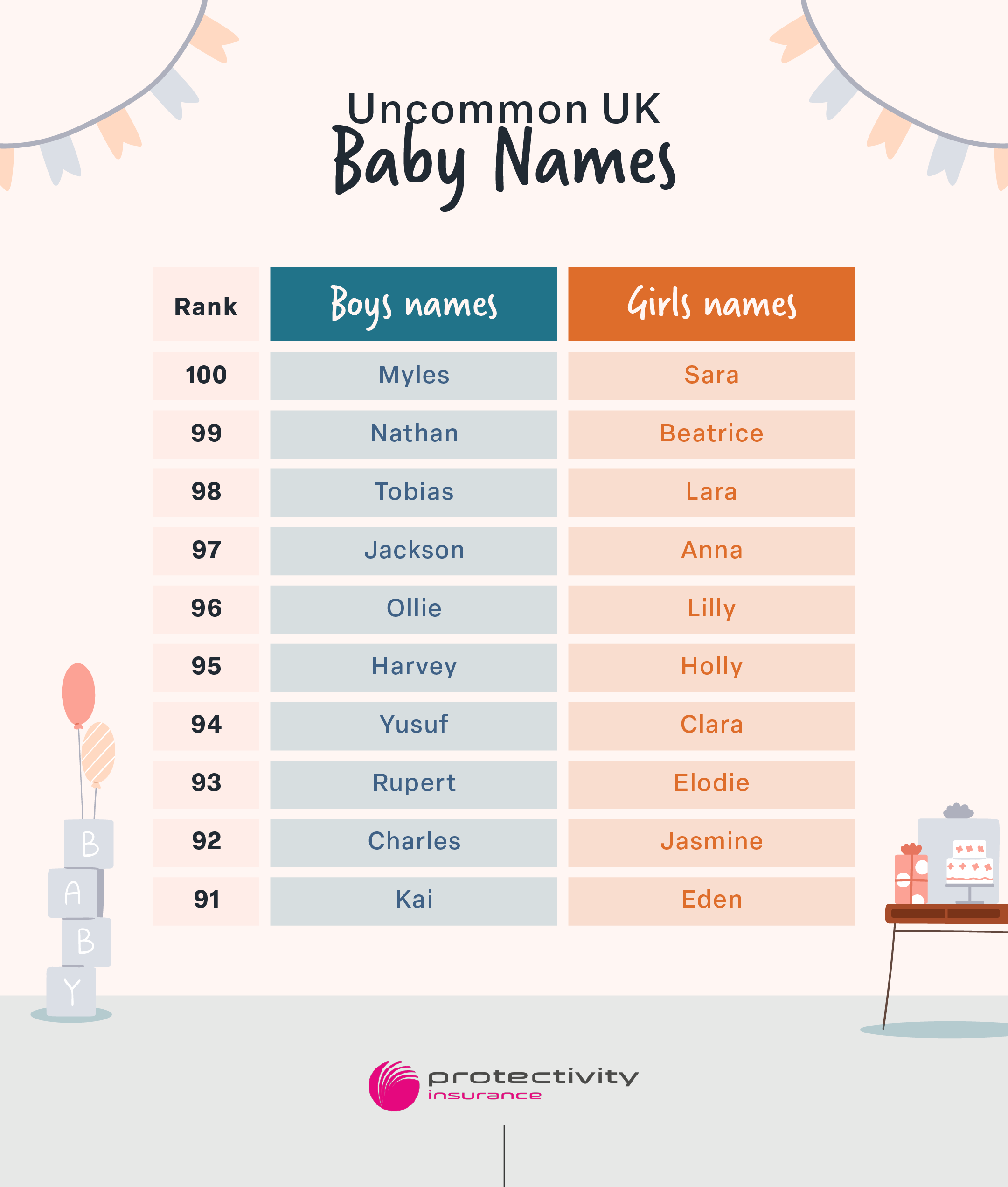 Which names are the most uncommon in the UK?

Many parents want to name their children something unique – in fact uncommon names are rising across the globe as parents are hoping the name they give their children will help them stand out.

To discover the most uncommon, we looked at which names rank 100th and below. One of the most uncommon names for boys is Myles, followed by Nathan, Tobias, Jackson, Ollie, Harvey, Yusuf, Rupert, Charles and Kai.

The most uncommon names for girls are Sara, followed by Beatrice, Lara, Anna, Lilly, Holly, Clara, Elodie, Jasmine and Eden.

So if you’re looking for a unique name for your child why not try one of the above? 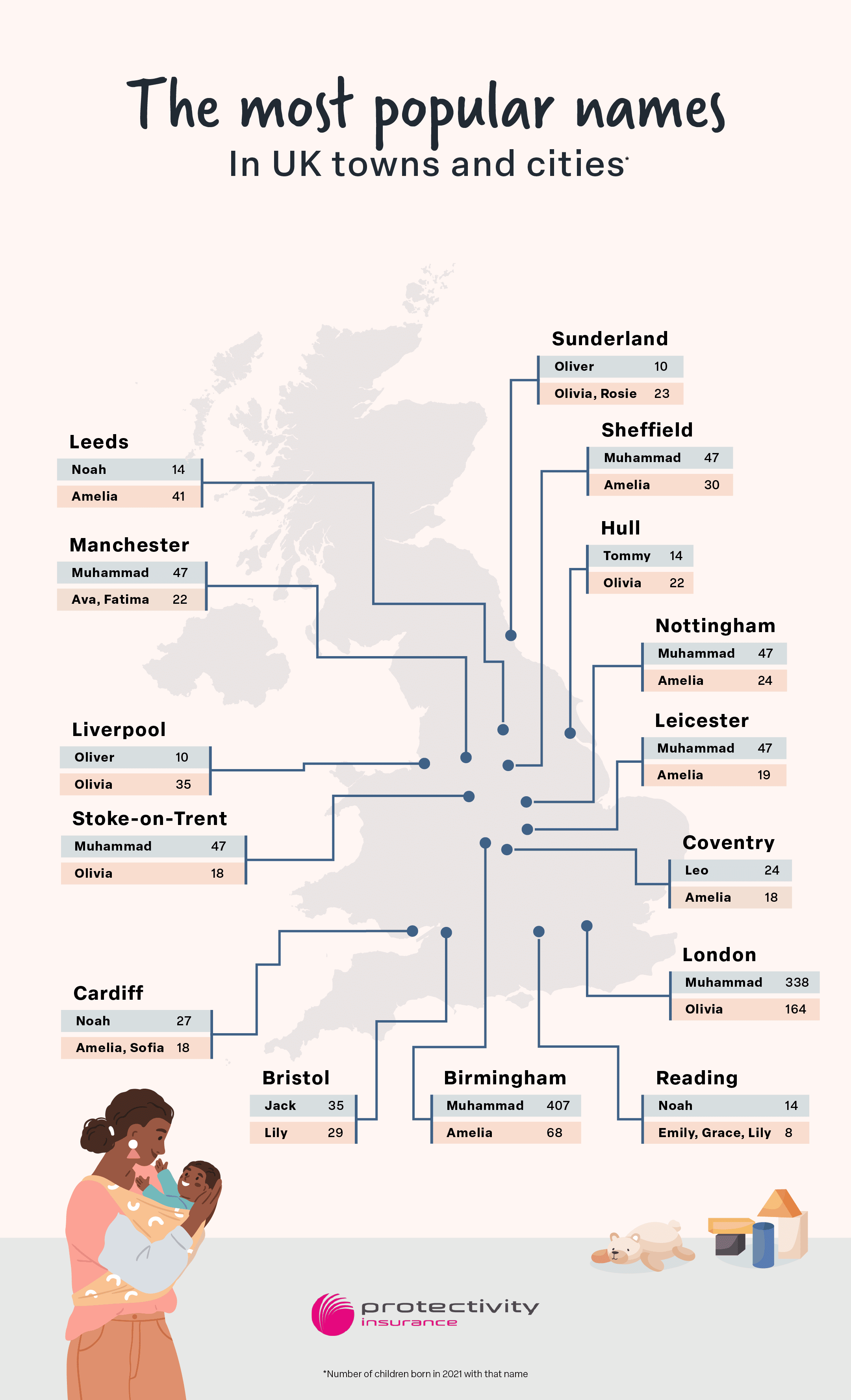 The most popular names in UK towns and cities

Across the UK the most popular names are Noah and Olivia but what are the most common names in different locations?

Discover below which cities are similar in naming their children and which have a different favourite name.

Birmingham, Sheffield, Leicester and Nottingham all share the same popular baby names. The most popular name for boys is Muhammad. In Birmingham, 407 baby boys were given the name – the most in any city in the UK.

The letter O is very popular in Liverpool and Sunderland as the most popular names are Oliver and Olivia. Interestingly, Sunderland has two top names for girls as 23 Rosies and Olivias were born in 2021.

Jack is the most popular boy name in Bristol, the only city where Jack tops the list! 35 Jacks were born in 2021. The most popular girl’s name is Lily where 29 children were given the name.

Following the trend of many other cities, the most popular boy’s name in Manchester is Muhammad. However, parents in Manchester are making their own trends when it comes to girls, as the names Ava and Fatima were given to the most children in 2021 – the only city in the top 15 where these names appear!

Three girls’ names top the most popular names, Emily, Grace and Lily all tie in top place. Similar to Leeds and Cardiff, parents also favoured the name Noah for their baby boys.

Olivia yet again tops the list for another city – which is no surprise as it is the most popular girls name overall in the UK. In Hull, 22 girls were born with the name Olivia in 2021. The most popular name for boys was possibly inspired by the hit TV show Peaky Blinders as 14 boys were given the name Tommy. 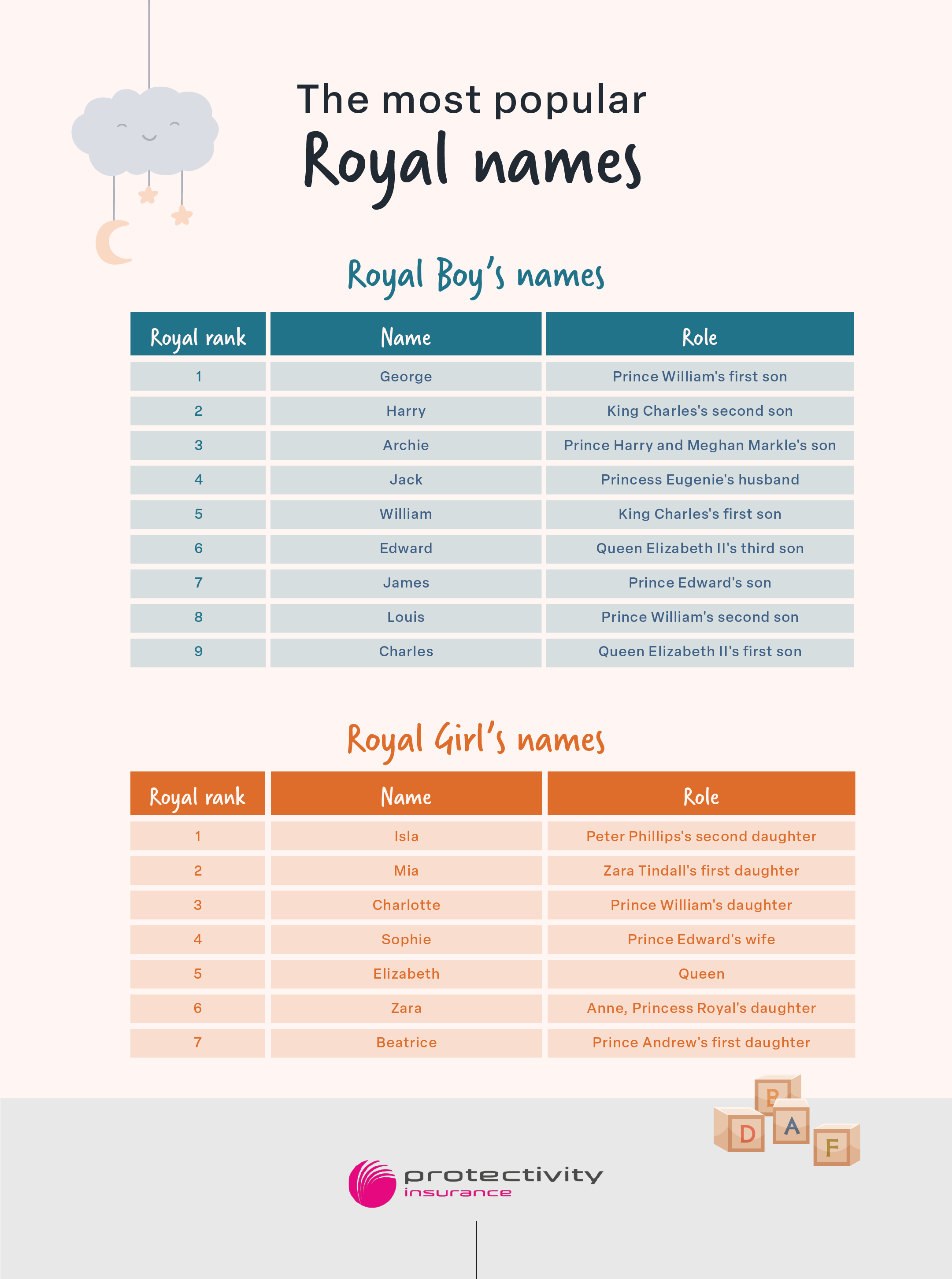 What are the most popular royal names?

2022 has been a year of ups and downs for the royal family, from celebrating Queen Elizabeth’s jubilee in June to unfortunately mourning her loss in September.

Elizabeth is the 5th most popular royal name for girls, with Peter Phillips’ daughter’s name Isla taking the top spot.

Names can increase and decrease in popularity across the years, depending on TV shows, music and trends at the time. We wanted to discover which names are growing in popularity to see which might hold the future top spots. In order to do this, we looked at the number of positions names have moved in the past five years.

Interestingly both names belong to leading characters in the hit Netflix show, Sex Education. The show which has a viewership of over 40 million could have been the inspiration for both Otis and Maeve growing in popularity in recent years.

Once your bundle of joy is here and named, caring for your child is the next step, check out these alternative therapies for both baby and parent that will promote wellness below.

Sleepless nights can be expected with a little one, however holistic therapies such as baby yoga can promote deeper and longer sleep cycles in children which parents will be grateful for!

Baby reflex therapy can also be used from 4 weeks and help parents learn and bond with their children. Babies’ feet can be the secret weapon when they’re struggling with wind or need soothing. Toes are said to be linked to the head and teeth so the therapy may help with teething.

Breastfeeding isn’t for all parents, some find it comes naturally whereas others can find it challenging. If you or your partner falls into the latter, you may need the support of a breastfeeding counsellor (sometimes known as a Lactation Consultant). These counsellors can provide tips, guidance and tailored instructions on how to breastfeed if you have twins, infants or a preemie.

To uncover the uncommon names, the team gathered the names which ranked 100th out of the most common names.

The most popular names by city were calculated by analysing the names which were given to children born during 2021 for the 15 most populated towns and cities in the UK.

To uncover which were the most popular royal baby names the team took a seed list of members of the UK royal family and compared this to where the names ranked overall – the names which ranked highest were most popular.

The names which had the most growth were calculated by analysing the number of positions moved in the past 5 years.

All data is correct as of December 2022.  Source: All data was taken from ONS