Christmas In The UK

When does Christmas officially begin?

We all know someone who is keen to get the festivities started early, with some people blaring out the Christmas tunes mid-November, or others that have put their decorations up before December has even started.

But when should the Christmas jovialities officially start? According to our research, the 17th of December is the most popular date to get in the festive mood – just 8 days before the big day! 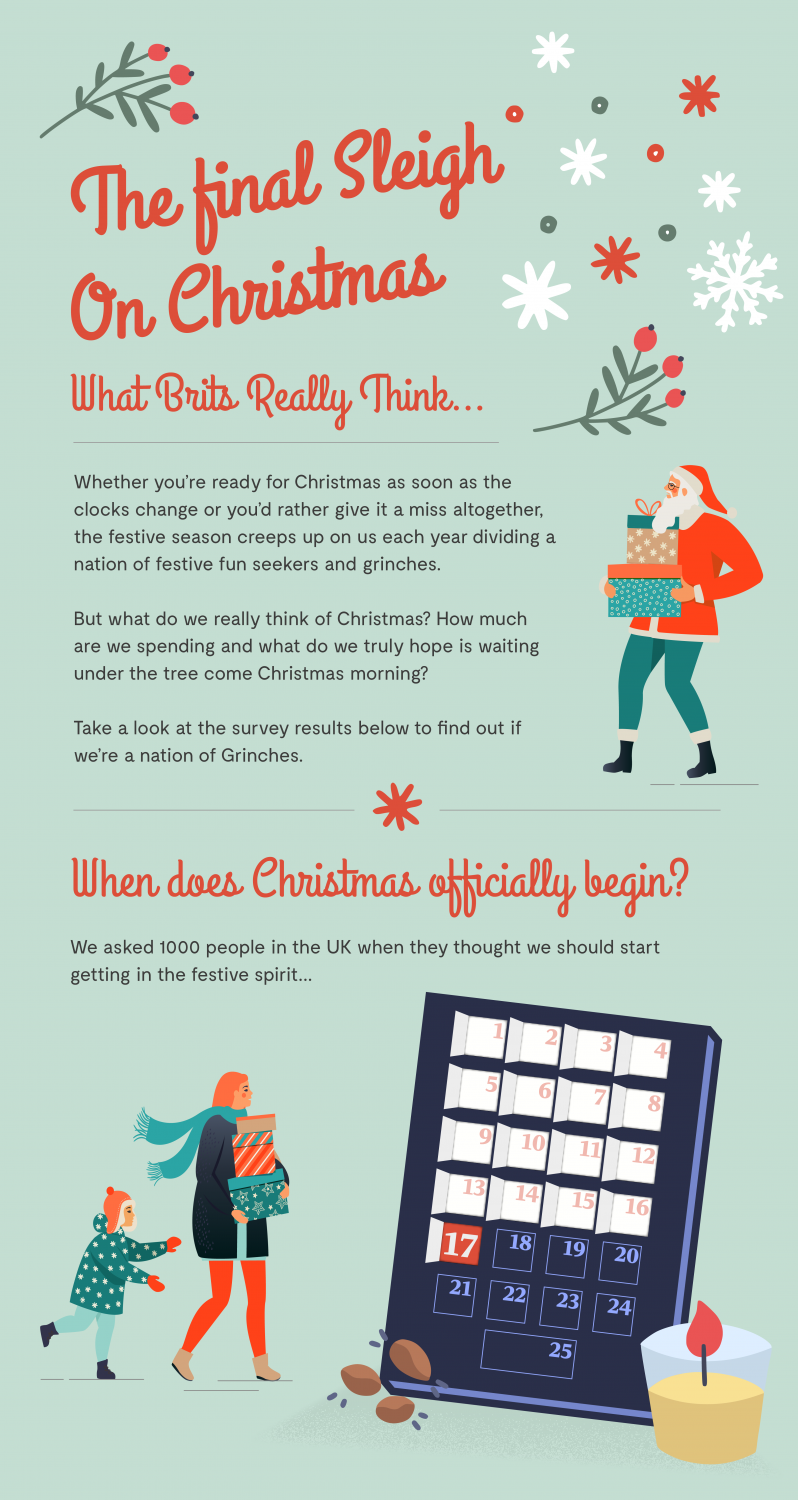 Are we a grinchy nation?

Overall, 62% of the people surveyed said they thought Christmas was over commercialised, but 28% of us thrifty Brits have found a way to avoid the over-commercialisation and busy shopping sessions by regifting a present received on Christmas day. 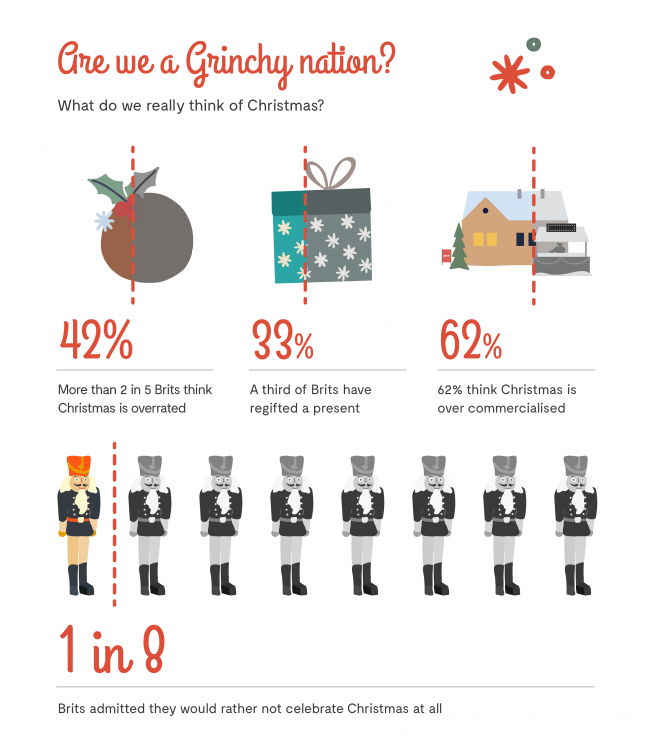 What are we splashing out on in the festive period?

Not surprisingly, most of our expenditure at Christmas is going on gifts – with Brits spending on average £213. Women are collectively spending more money on Christmas gifts than men with 27% spending splashing out between £150-£300, but newly engaged couples take the crown with 16% spending a staggering £400-£500 on gifts.

Food comes in second place – with an average of £102 spent on the meal for the big day, again this isn’t surprising, considering the sheer quantity of food and trimmings we enjoy on Christmas day. What is surprising however is the amount we’re spending on decorating our houses, with some Christmas fanatics spending almost as much on decorations per year as Christmas food at an average of £96! 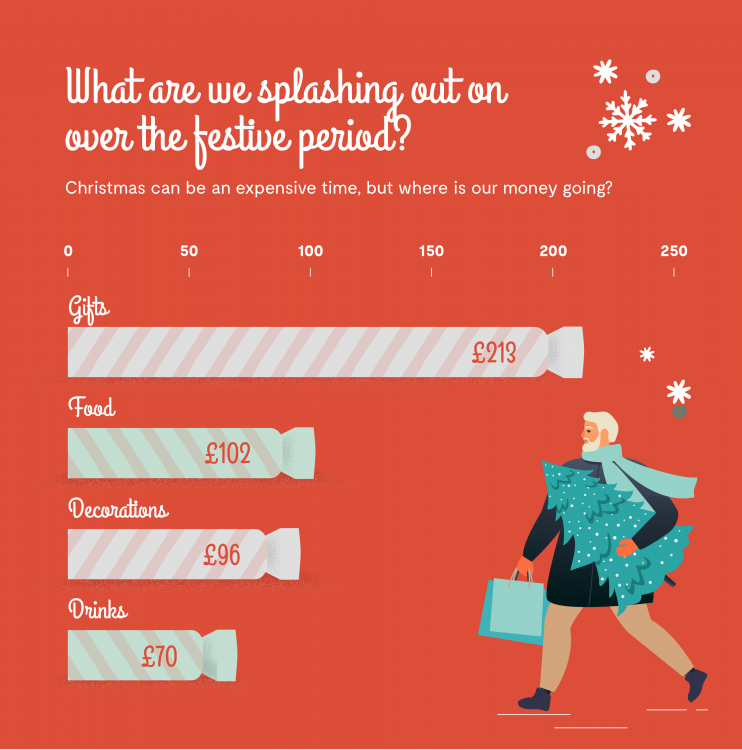 What do we really want for Christmas?

Given the expenditure of Christmas and the financial stress it can cause, it may come as no surprise that the most sought after christmas gift is not a sentimental one but money to help pay those bills. 32% of Brits stated they would prefer money for their Christmas gift over fashion, jewellery, practical presents or vouchers and experience days. 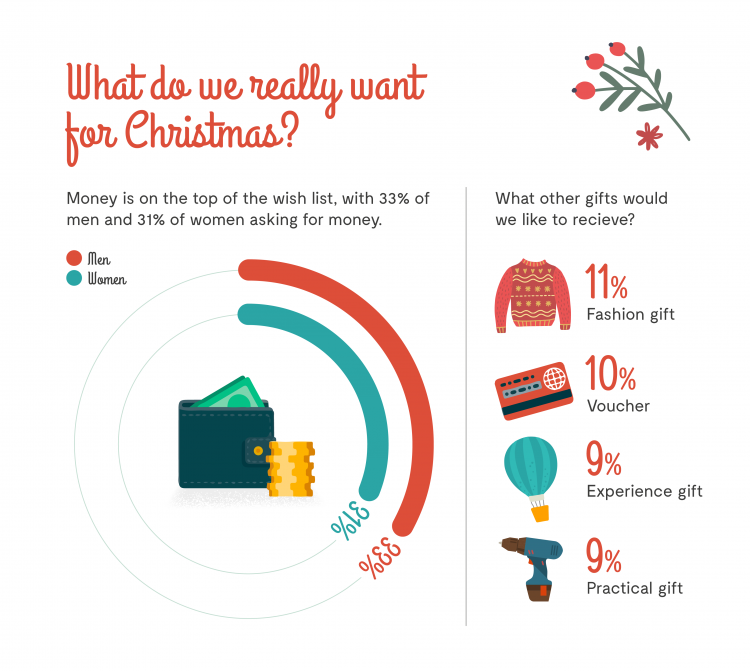 The true cost of Christmas

With almost half of Brits (42%) admitting they get into debt each year due to Christmas spending, on average by £218 per person, it begs the question of just where and what is our hard earned money being spent on?

With such large sums of money going towards gifts, food and attending various social events, Brits are feeling the strain, with 41% stating they feel financially stressed at Christmas. Women are feeling it most with 44% stating they feel financially stressed in comparison to only 37% of men. Whilst women may appear to stress more, it has been revealed they are actually more thrifty with their money as only 37% of women admitted going into debt each year, in comparison to nearly half (48%) of men. 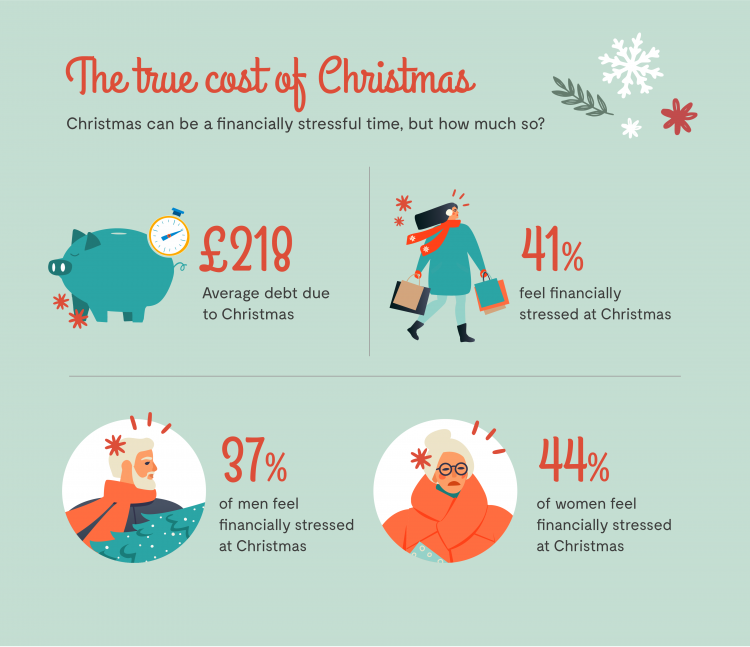