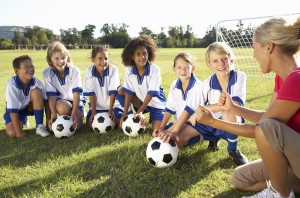 Woman are participating more and more in sports previously perceived to be male only sports and one of the most popular ones is football. In 2015, the Women’s England football team came third in the world cup, the games were supported with media coverage and received a lot of publicity, driving further interest in the sport.

The England women’s team played its first match (against Scotland) in 1972 and while their early exploits went relatively unnoticed, in recent years women’s football has become an increasingly recognised sport. At London 2012, British women participated in the women’s Olympic football tournament for the first time raising the profile of the sport.

Hope Powell was the women who led Great Britain’s women’s Olympic team at London 2012 and has been one of several managers who have speculated that a women will lead a men’s premier league team in the next decade. She has become a role model within the sport, following in the footsteps of women such as West Ham vice-chairman Karren Brady, who became the first female managing director of a Football League club when she took charge at Birmingham in 1993.

The profile of women within football is certainly growing and the FA are committed to encouraging more girls and women to participate within the sport. Female participation is needed at all levels, from players to management and coaching. A large part of achieving growth in girls’ football is by introducing more girls to the sport at an early age, a great way of doing so is through after-school football clubs. If you are running an after-school club for girls’ football or looking to set one up don’t forget to make sure you are covered, our after-school club insurance is ideally suited to protect you whilst running your club.

If it’s coaching that you might be interested in, the Football Association runs courses for aspiring coaches at all levels, so it’s very easy to become a football coach.

Once qualified, you can coach at a range of different levels from amateur to professional and many coaches do so part time. As a sports coach you also need to consider other basic requirements – for example, if you work with children then you will need Disclosure and Barring Service (DBS) clearance. That’s why we provide Public Liability and Professional Indemnity, as standard, to all our sports coaches. Our specialist Sports Coaching Insurance will protect you from a claim should someone you are coaching get injured. Find out more information about our Sports Coaching Insurance.

So why not consider supporting the growth of female football coaches and follow the legacy of women such as Hope Powell?