Evidence suggests that humans domesticated dogs almost 30,000 years ago. However, it was around 10,000 years ago, when dogs started cropping up in our artwork and burial grounds, that the modern bond we see today truly began. It’s a relationship literally built over thousands of years, so there’s no denying that the love we have for our canine friends runs deep. In fact, there’s even scientific evidence to prove it! A study led by Nagasawa found that when dogs and people gaze into each other’s eyes a hormone called oxytocin is released in both the human and the dog. That’s the same hormone that’s released when two people, who connect emotionally, look at each other. So basically, we love our dogs as much as we love our family, and they love us back.

So, considering our rich history and strong bond, it’s no surprise that dogs are one of the world’s favourite pets. Although, whilst domesticated dogs as a whole have always been popular human companions, specific breeds have seen dips and peaks in popularity. Whether it’s the working breeds of the late 1800’s or the smaller (and slightly lazier!) popular dogs of today, it seems there’s always a breed in the lead, but which ones are currently ruling the web?

Well we wanted to find out! So, using a list of over 180 different dog breeds, we analysed the Google search volume data for countries across Europe, and some of the results may surprise you… 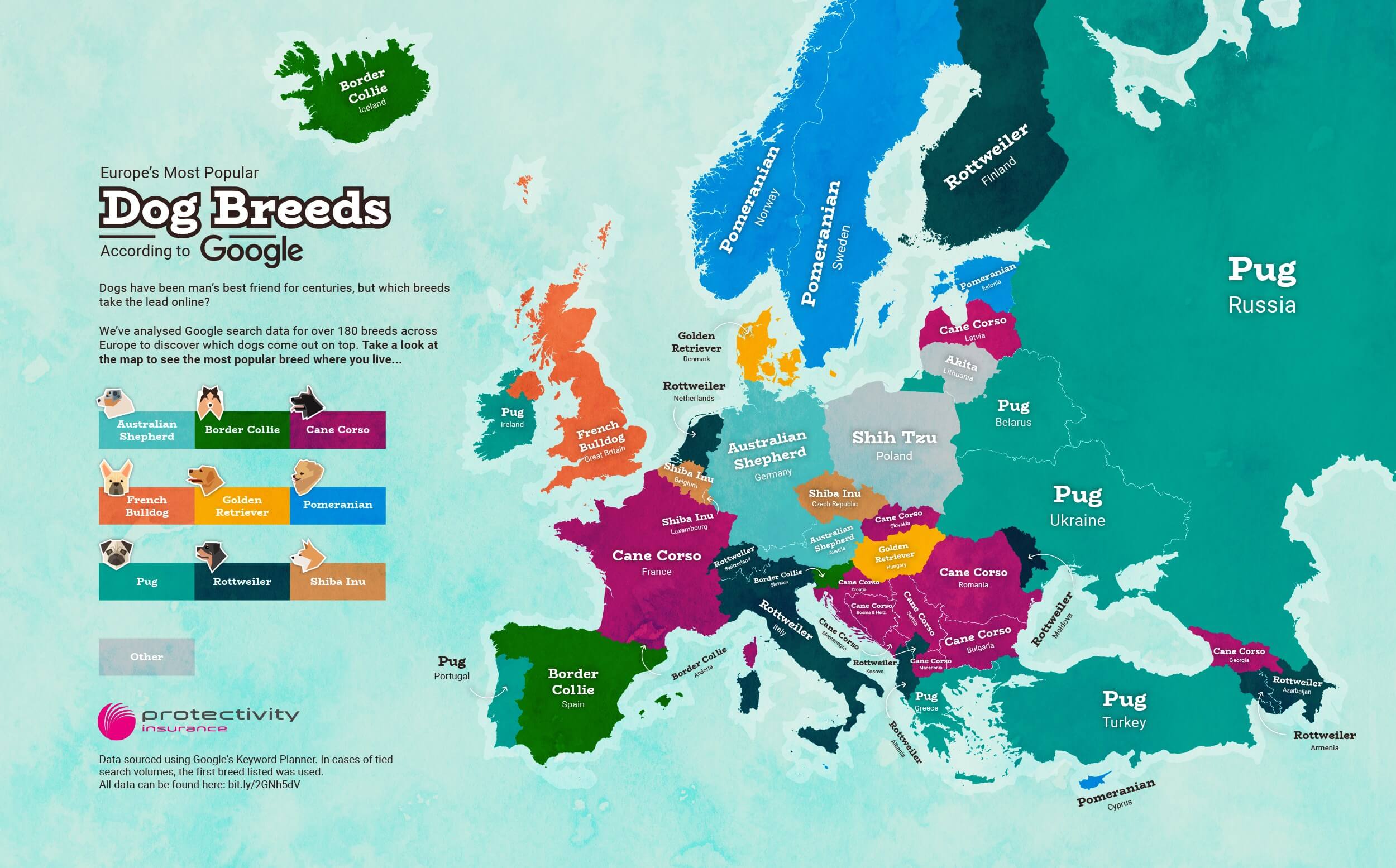 In first place, as the most Googled breed across Europe, is the Cane Corso. This large Italian Mastiff can weigh up to 50kg and is known for being a highly intelligent and very family-orientated breed. The breed’s name roughly translates from the Latin as “bodyguard dog”, which is no surprise considering the Cane Corso’s strong frame! According to AKC, the Cane Corso has gained popularity over the last few years, rising 13 places in their Most Popular Dog Breed Ranking List since 2013. The Cane Corso is the most searched for breed in 12 countries including the likes of France, Luxembourg and Latvia.

Europe’s second most searched for breed, topping the list in 10 different countries, is the Rottweiler. This classic breed is believed to have descended from dogs used by the Romans as they marched through Europe, and is known for being intelligent, strong and loyal. The Rottweiler is an online favourite in countries like the Netherlands, Italy and Switzerland

A less surprising entrant in third place is the Pug, which is the most searched for breed in eight different countries across Europe including Russia, Turkey and Portugal. You could say the Pug is currently at its peak in terms of popularity with Pug themed products available all over the place! You can get ‘Pug’ pretty much anything from pyjamas to handbags and even phone cases. We’re clearly obsessed with those little scrunched up faces!

In terms of the UK, the most Googled dog breed is the French Bulldog, which fails to appear anywhere else across Europe, although it’s also the most search for breed in the US. Despite its name, the French Bulldog actually originated in England and became known as the French Bulldog in the late 19th and 20th centuries when it gained popularly with members of the Paris bohemian class. Today, the breed makes for a great city pet, known for needing little dog walking and having a quiet demeanour.

So, overall all its the Cane Corso that rules the web in Europe, but whether your favourite breed’s a Pug, Labrador, Collie or Pit Bull, we can certainly all agree that dogs as a whole are pretty awesome!